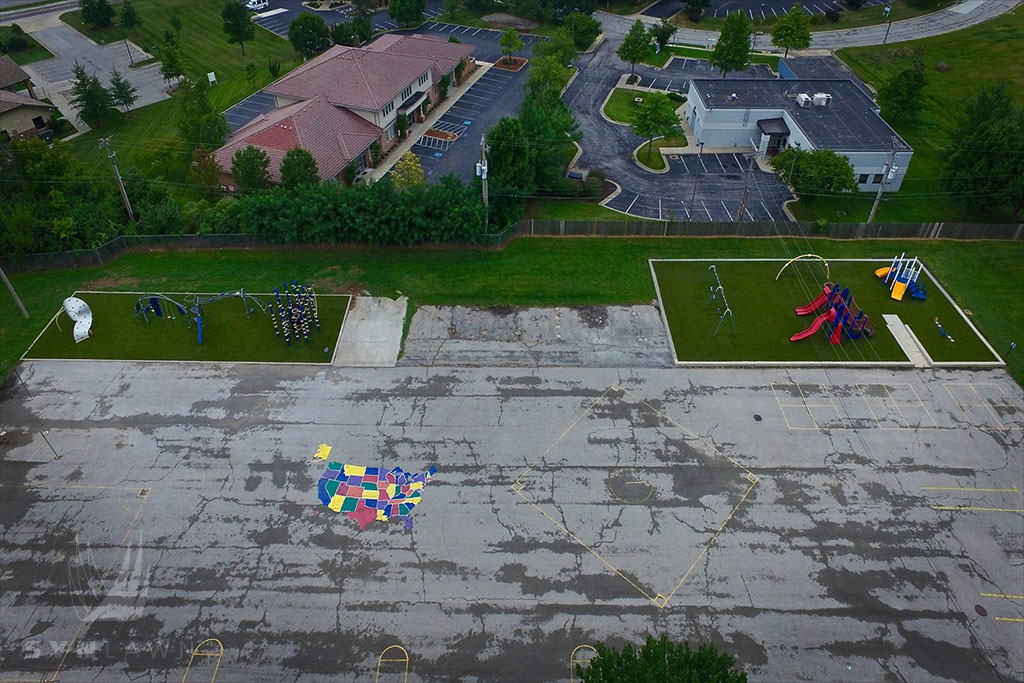 In this three-part case study, three neighboring school districts in Kansas and Missouri are choosing SYNLawn artificial grass as the Pursuit of Safe Play surface solution for solving issues like arson, injury, and maintenance

As noted in part 1 and part 2 of our case study series, ensuring that kids are safe while playing on the playground is important for principals and staff members. However, some surface types require more maintenance than others and can ultimately compromise the safety of the play areas. When playground maintenance became a bear for the Lee’s Summit School District, they knew they had to find a better solution that still keeps children’s safety at the forefront. After learning about the success nearby Blue Valley School District and Blue Springs School District had in adding artificial grass to their playgrounds, they chose to follow in their footsteps.

Lee’s Summit R-7 School District (LSSD) is located in Lee’s Summit, MO, and includes 18 elementary schools, 3 middle schools and 3 high schools. Most of their playgrounds utilized wood mulch, and while injuries due to the mulch may have occurred like those at BSSD, Lee’s Summit mainly switched to SYNLawn artificial grass to address increasing maintenance costs; however, addressing student safety is their first concern. The Pursuit of Safe Play guided them to SYNLawn’s play surface options. 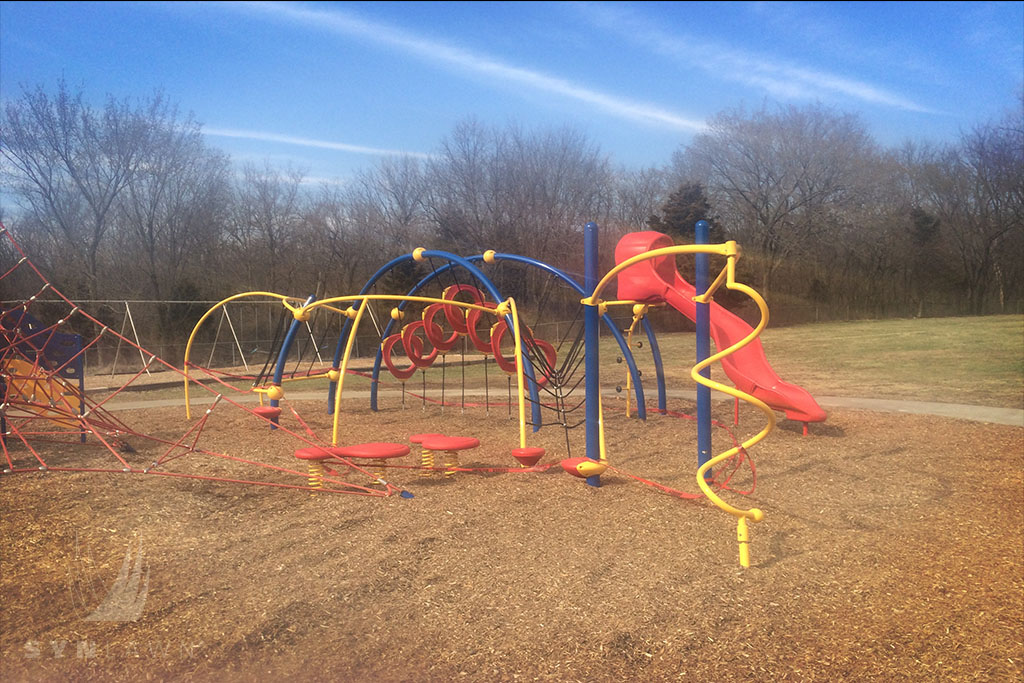 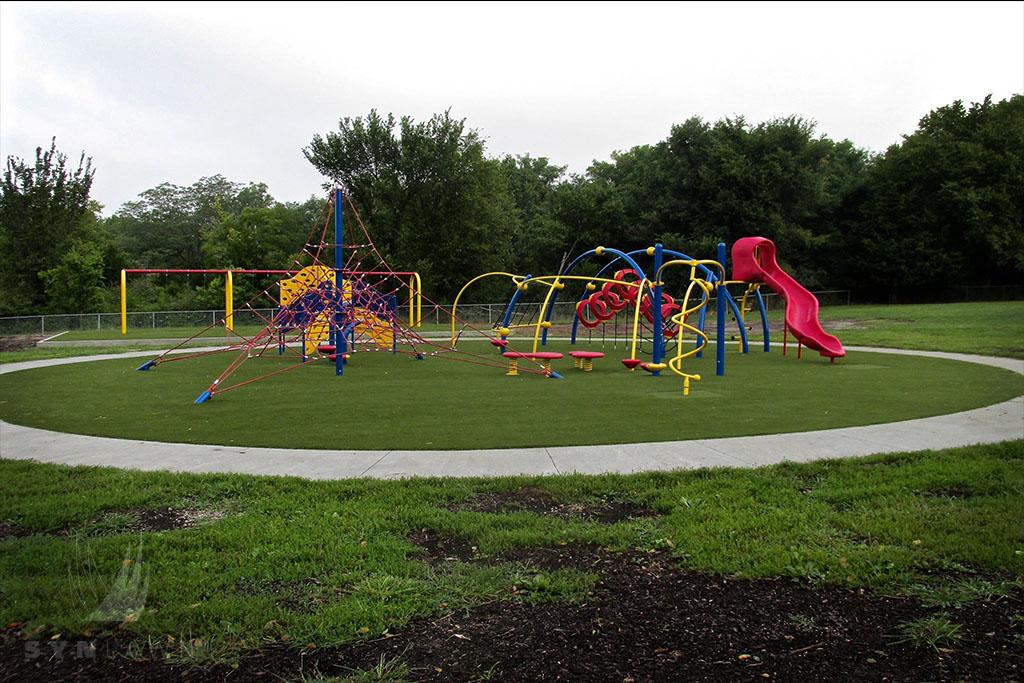 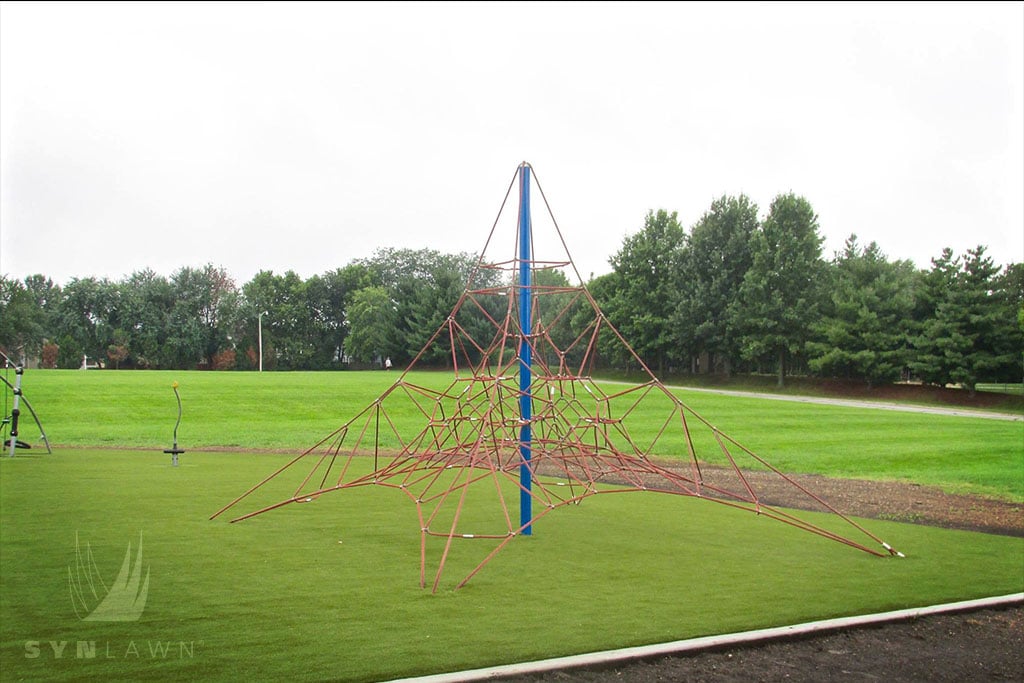 (Top Left) Lee’s Summit School District had wood mulch at most of their playgrounds, including this before photo of Hazel Grove Elementary. (Top Right) After speaking with nearby school districts who turned to artificial grass, LSSD also turned to SYNLawn Kansas City for the installations. (Bottom Left) The wood mulch was constantly being displaced, which left the kids to play on an unsafe playground surface. (Bottom Right) Since SYNLawn artificial grass is under playground equipment like this climbing structure, students are protected from falls as high as 10 feet.

While Gorrell heard about SYNLawn and the nylon advantage from both Jody Gill of BVSD and Dan Anderson of BSSD, he still wanted to do his own research. For Gorrell and Ryan Hall, the Pursuit of Safe Play combined with environmental and safety supervisor for LSSD, the most important factors for them were safety testing, the durability of SYNLawn’s SYNBermuda 200 (now called SYNRye 211) and the manufacturer warranty.

According to Angela Grego, owner of SYNLawn Kansas City, she recommends looking at what is being spent on maintenance over the long term, getting a bid and figuring out if artificial grass would be a more viable option. “The school districts, in particular, are looking at long-term budgets. Having a lifetime warranty on your playground offers real peace of mind and means they won’t have to replace it for at least 15 more years. That is very appealing for any school, and the maintenance savings is huge,” Grego continued. (Left) LSSD had SYNRye 211 installed at eight of its playgrounds, including this one at Greenwood Elementary. (Right) This aerial view of Westview Elementary shows two playground areas that feature SYNLawn artificial grass.

Like BVSD, LSSD also installed SYNRye 211 with TrampleZones™, which are sections of dense turf installed in high-traffic zones, under swings and at the end of slides and other places where we see the most amount of activity. The SYNRye 211 is an artificial grass that is made of 100-percent nylon grass blades and features exclusive HeatBlock™ Technology to help keep temperatures low. It is great for the most demanding applications like children’s playgrounds and features a drain rate of up to 30 inches per hour, which is ideal for areas like Missouri that see plenty of rain and snow. According to CSA-approved fall attenuation, SYNRye 211 also protects children from falls as high as 10 feet. It received the coveted Class One fire rating and is one of two SYNLawn infill-free lawn products available in the market to be deemed “fire-safe.”

All of these maintenance issues cost the school district too much time and money to keep the wood mulch maintained. ~ Kyle Gorrell, director of facilities at Lee’s Summit School District 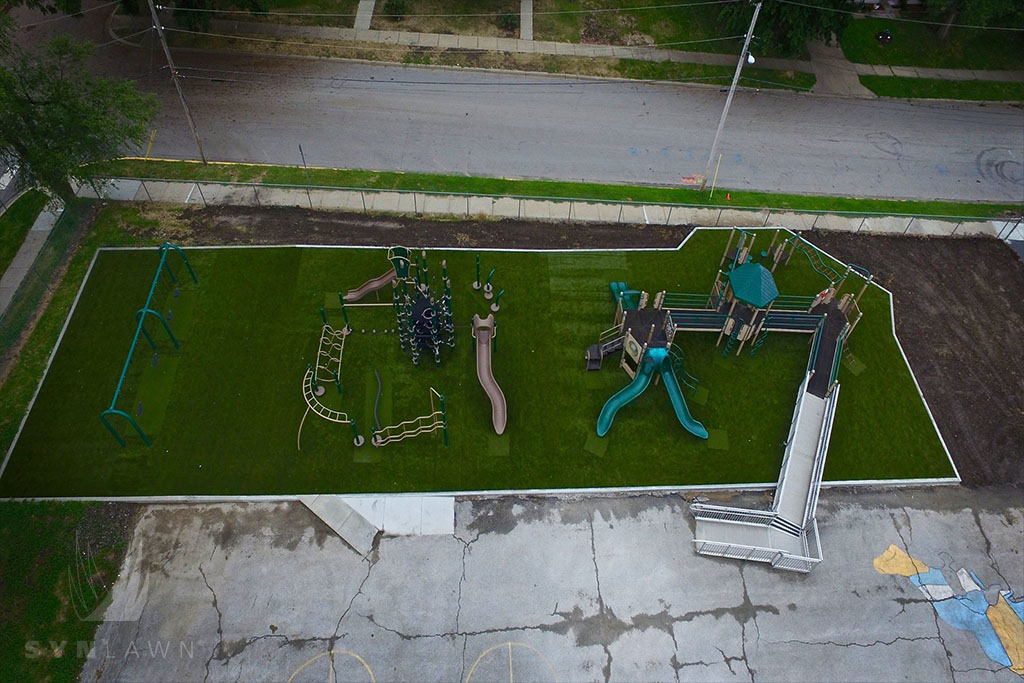 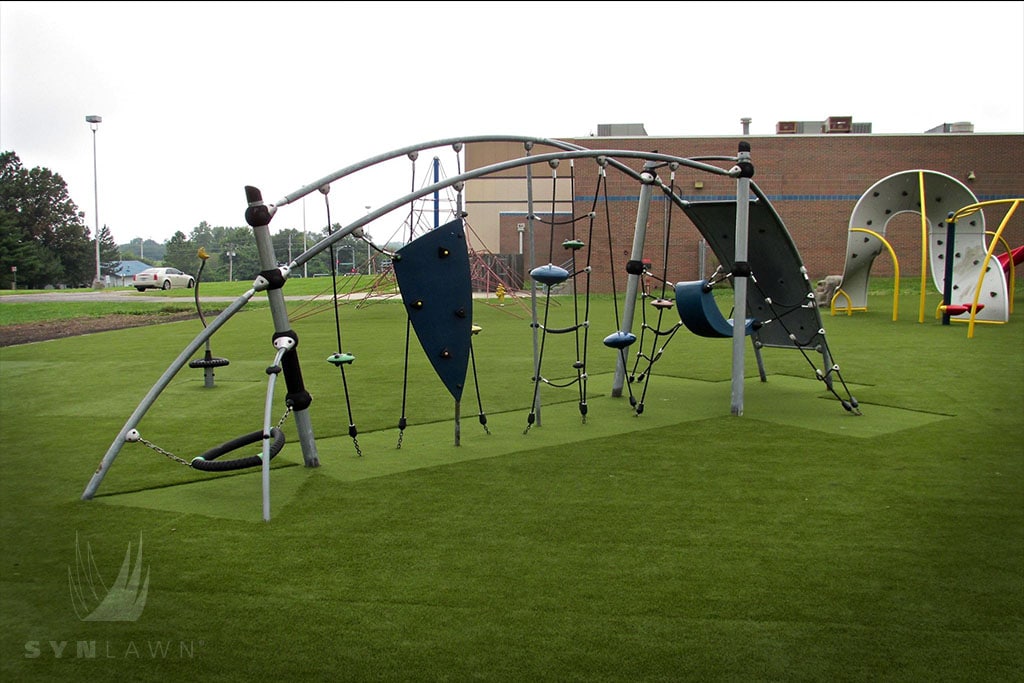 (Left) This aerial shot shows a playground at Lee’s Summit Elementary, and it’s equipped with slides, a swing set and wheelchair accessibility. (Right) SYNRye 211 was the playground surface of choice because it’s a fire-rated artificial grass that’s made of 100-percent nylon grass blades.

The SYNLawn Installation Process and Results

Over the course of the summer, SYNLawn Kansas City was able to install eight playgrounds and will complete the remaining 12 during the 2015-2016 school year. “As a part of another project, we had a very small play area installed a year ago for a Head Start program. It still looks brand new,” Gorrell added. 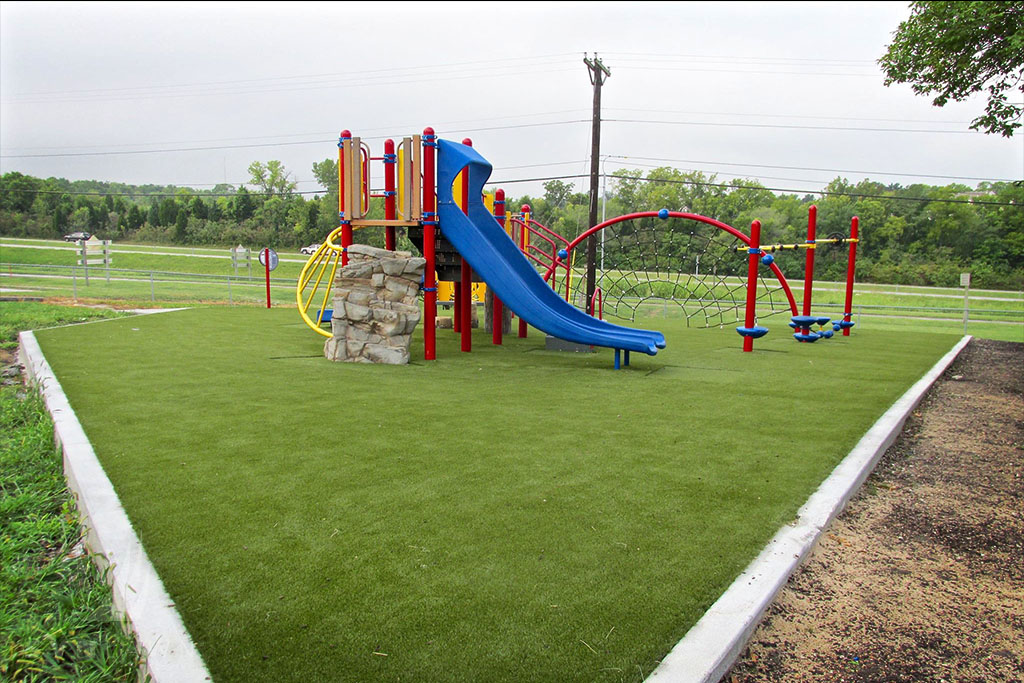 (Left) LSSD chose SYNLawn artificial grass as a safe playground surface solution because of costly maintenance. (Right) This infill-free lawn also includes TrampleZones™ that are placed in areas that get the most activity like under this swing set at Underwood Elementary.

While Dan Anderson of BSSD recommended starting out with the concrete curbs, Gorrell had a different viewpoint. “We were moving so quickly that not all of the equipment could be installed before the concrete curbs. It created a few issues. It’s always best to start with equipment install and work your way out,” he said. 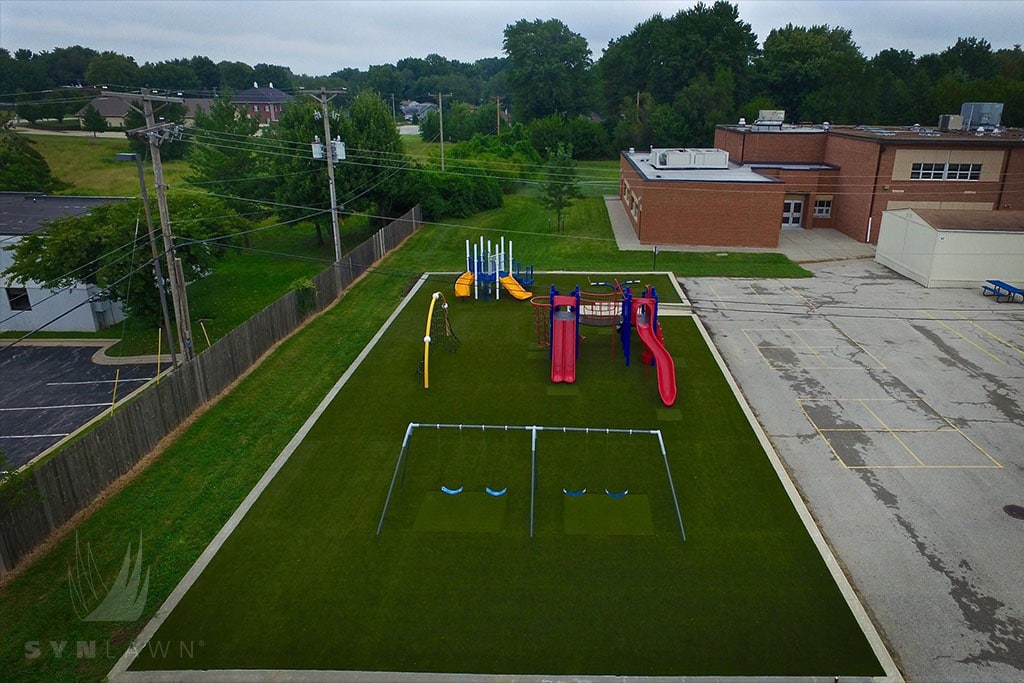 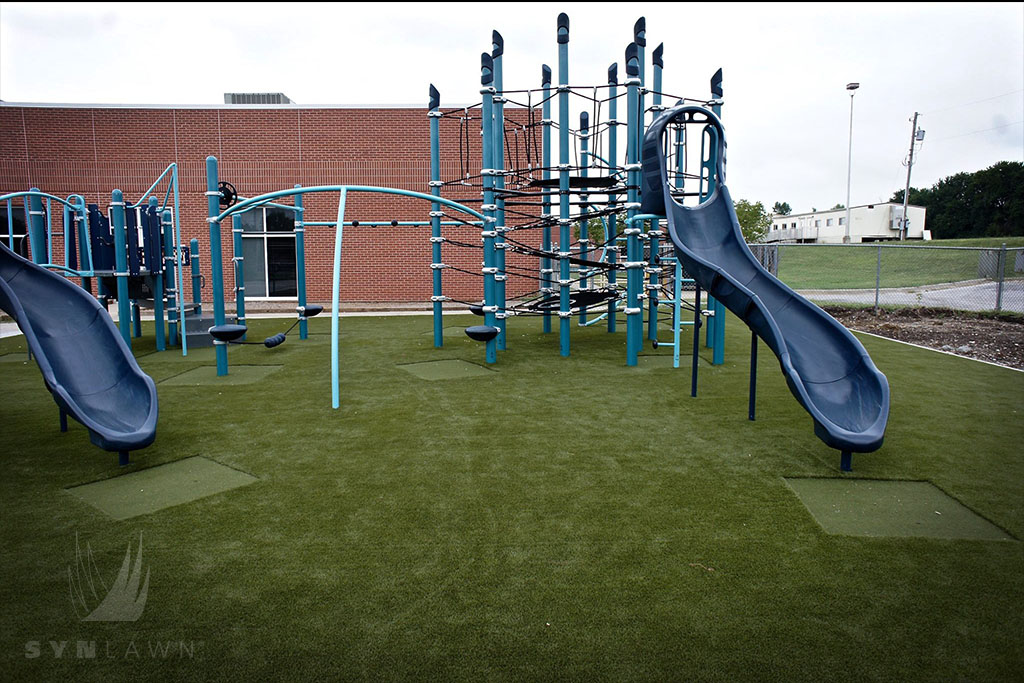 (Left) SYNLawn offers the best warranty in the industry, which means the school district won’t have to worry about replacing their synthetic turf for quite some time. (Right) During the remainder of the school year, LSSD will be replacing the rest of the wood mulch playground surfaces with SYNLawn’s artificial grass.

Add SYNLawn to Your Playgrounds

If you’d like the Pursuit of Safe Play areas to create a safer surface for your students at school or kids at home, then learn more about the playground products we offer. When you’re ready to discuss your need for artificial grass for your playground project, you can click here to find a SYNLawn distributor near you.